Invisible in the dark

Rare
Hungry Ghosts are Spirits from Yomawari: Night Alone that haunt the streets of the Downtown's shopping district.

Hungry Ghosts take the form of a naked humanoid with a hole for a face and a large belly. Their skin takes a darkened pale color, and you can visibly see the outlining of their rib cage.

When they chase after the Protagonist, a large mouth opens on their fat belly.

During your first encounter with one of them in the Downtown area in Chapter 5 (Yomawari: Night Alone), it moves slow. However, in later encounters, the rest of the Hungry Ghosts will move very fast. So, because of limited stamina, the Protagonist needs to move quickly to hide or teleport using the telephone booths.

You can also sneak behind them slowly, as their field of vision doesn't include behind their bodies. However, running behind them may alert them of your presence.

This spirit is based on the Gaki, also called the Preta. Preta are supernatural beings that are constantly hungry and just like this spirit they have very narrow limbs but an engorged stomach, likely resembling malnutrition. The common translation for these beings is Hungry Ghost.

Hungry Ghosts are based on the rumors in Protagonist's Town about the shopping district's mannequins moving around at night. These rumors are found in the game's official website.

These Spirits are malicious, as they were sealed or driven away with the Salts that were placed all over the Downtown area. It seems that the Centipede Spirit is responsible for protecting the place from these Spirits.

The Hungry Ghost when it's stationary.

The Hungry Ghost when it's chasing after the Protagonist.

The Hungry Ghost in the Yomawari: Night Alone scans. 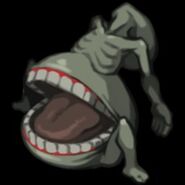